Having looked at the the contenders and hopefuls in the East, it’s time to cast our eyes to the remaining five teams that will no doubt make up the bottom of the conference standings. These are all young teams with some players of real potential, but none of them are quite ready to take the next step up and compete for a playoff spot or more.

This leaves these organisations in the precarious position of trying to develop their youngsters, whilst not playing too winning too many games. I only fancy one of these five teams to surpass their predicted win totals…

Preview
It’s no secret that Atlanta is trying to build their version of the Warriors. Travis Schlenk, the team’s GM, spent twelve years with Golden State as an assistant coach and he was part of the front office when Steph Curry, Klay Thompson and Draymond Green were drafted. Schlenk understands how the Warriors’ dynasty was built.

However, you can’t simply build Warriors 2.0 and expect to be at anything remotely close to their current day level. Their success was anything but instant: Curry was drafted in 2009 and it took another four seasons to even make it to the playoffs – the first title came after another two. After Curry, Thompson joined him in 2011 and Green a year later. The Warriors’ rise may now seem meteoric, but it was steady growth and the gradual addition of the right players that made the dream of titles a reality.

Last season saw the start of this rebuilding process in Atlanta: the team opted to blood their youngsters and either trade away or not re-sign their elder statesmen. They gave up dominant big men Al Horford, Paul Millsap and Dwight Howard over the course of two offseasons. In their place were John Collins and Taureen Prince, two young and athletic players who will be expected to play a prominent role once again this coming season. The season was a bust, but that allowed the team to secure the third overall pick in the 2018 draft.

The Hawks traded the #3 draft pick to Dallas for their 2019 first-rounder and Trae Young – who has drawn comparisons to Curry. This will be added pressure during his rookie season, but it’s important to remember that although a future Hall of Famer, it took Curry until his fourth season to show signs of becoming a star. Young is available at 16/1 with Skybet to win Rookie of the Year – which is about right considering his likely inconsistent performance and shooting in his first NBA season.

Young will take over at point guard after the team traded away Dennis Schroder to the Thunder. Along with Young, the team drafted Kevin Huerter and Omari Spellman at 19th and 30th overall respectively. The Hawks used their three first round picks to draft three players who excel at three point shooting – welcome to the modern NBA.

It’s important to keep the Warriors’ slow and steady growth in mind Atlanta, the team is highly unlikely to see much on court success this season – likely finishing with the league’s worst record. The only sensible bet here is to back the Hawks to finish with under 24.5 wins this season at 5/6 with Skybet. Yes it’s a short price, but elsewhere the under/over line is 23.5 wins at similar odds. Expect Atlanta to pick up a top five pick in the lottery. 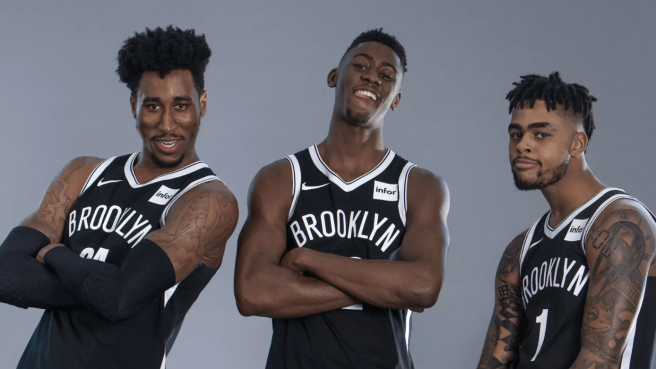 Preview
The Brooklyn Nets find themselves in control of their first round draft pick for the first time since 2013. This should mean that the team will tank and aim for a top five pick, but the Nets have a team mainly made up of veterans and promising players in their third and fourth seasons.

This could make it difficult for the team to play for losses. D’Angelo Russell, Spencer Dinwiddie, Rondae Hollis-Jefferson and Joe Harris are all players that have been improving steadily since entering the league. Should we see Russell finally have the breakout season he’s teased over the last two, the Nets would be mad to tame him into tanking.

Dinwiddie and Hollis-Jefferson both had their breakouts last year – almost doubling their scoring and assists – and should make nice complimentary pieces to young center Jarrett Allen and Russell.

The vets signed by Brooklyn this offseason were all signed to one-year deals. The team will only be committed to $38 million in salary next season, meaning they will be able to pitch to the stacked 2019 free agent class.

This all points to a team that will push for the worst win/loss record possible should they stumble out of the gates. Brooklyn will hope they’re able to secure a top five pick and then add to their squad with one or two high-profile free agent signings. With their own draft pick at stake, I’d be amazed if the Nets surpassed their 28 wins last year. Because of this, the 23/20 offered by 888sport for Brooklyn to win under 31.5 games seems ludicrous. Let me know if you see anywhere offering the Nets to win under 28 or so games! 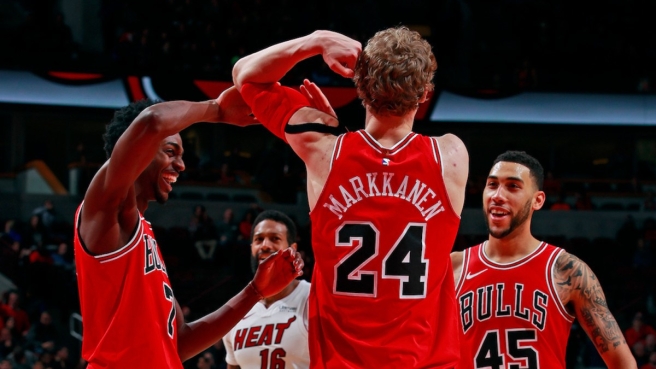 Preview
Barring a solid run in December that saw the team pick up ten wins in sixteen games, the 2017-18 season was pretty disastrous for the Bulls. The team started the season with a 3-20 record, making them the Association’s worst team by a comfortable margin.

However, it wasn’t all doom and gloom – the dire season allowed Chicago to draft promising big man Wendell Carter Jr in June’s NBA draft. Carter Jr is an athletic behemoth that can play at power forward and center. The rookie impressed at the Summer League tournament – averaging over 14 points, 9 rebounds and 2 blocks per game. However, Carter isn’t expected to make a big impact in his first season and is considered a raw prospect. Considering his likely lack of significant playing time, he’s a rightfully big 20/1 with 888Sport to win Rookie of the Year.

This does fit in line with what should be Chicago’s progression timeline: they’re likely looking to make the playoffs in 2-3 years, rather than right now. The Bulls are a promising young squad, but there are more experienced teams that should beat them to the lower seeds.

This year’s squad will benefit from a (hopefully) fit and firing Zach LaVine and Jabari Parker. Both players are entering their fourth season in the league and coming off ACL injuries. LaVine and Parker both tore their ACLs in February 2017 and missed the vast majority of the 2017-18 season. The Bulls will be hoping that these two are able to gel with each other and the rest of the squad and live up to their $20 million/year contracts.

It’ll be interesting to see where Parker fits in – he’s naturally a power forward, but Markannen will almost certainly be playing at the four again in his sophomore season. Much of the team’s success will depend on Parker’s fitness and ability to slot in at small forward.

I can see Chicago being a strong offensive team when in-form, but really struggling on the defensive end – LaVine, Parker and Markannen are all defensive liabilities. Even so, this year’s team has to be better than last’s. The Bulls to win over 28.5 games seems a sensible bet at 5/6 with Skybet. That’s just one game more than the team managed last season – this year with what should be a fully fit LaVine and Parker and improved Markannen and Kris Dunn, the they should manage a good deal more than one win more than last season. 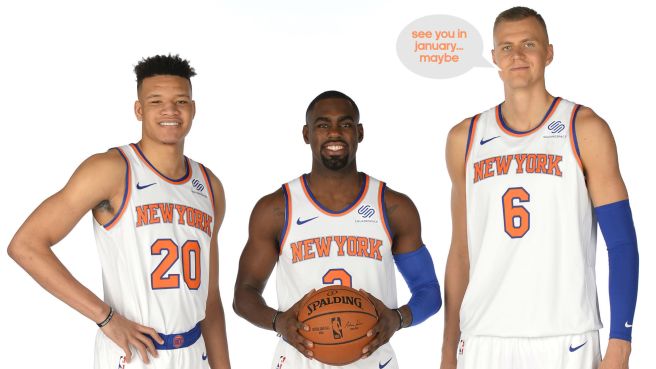 Preview
The Knicks are a team like the Bucks – their success depends on the play and development of their young star player. Whilst Milwaukee have the Greek Freak, New York possess a ‘unicorn’ in Kristaps Porzingis.

When Porzingis plays, this team has the potential to be a fringe playoff team, but without him tanking is pretty much their only option. With Porzingis, the Knicks were a .500 team hovering around eighth, but after his ACL tear the team only won six of their remaining 27 games without him. He’s not due back from injury until early January at the earliest. Expect a similar story this season – tanking should begin as early as the first game of the season!

Two people that might try to reverse that narrative are new head coach David Fizdale and promising rookie Kevin Knox.

Fizdale was fired by Memphis after a poor start last year, but is a coach with plenty of potential and it’ll be interesting to see him coach in a big market without the pressure of winning in the short term. Knicks fans will have to stick with Fizdale through the tough losing seasons ahead – much like Sixers fans stuck with Brett Brown.

Drafted ninth, Knox looked a very nice player during Summer League where he averaged over 21 points and shot the three at a nearly 36% clip. The New York youngsters should get plenty of minutes this season – Knox and Ntilikina should be getting serious minutes to develop ahead of the vets this season. If you think Knox will shine like he did in Vegas, he’s available at 8/1 with Skybet to win Rookie of the Year.

With most bookies offering 4/6 is shorter for them to win under 29.5 games, the best bet I can recommend is backing the Knicks to win under 31.5 games at 5/6 with Skybet. The team should be tanking for the best lottery odds possible, and with Porzingis out indefinitely that should be easy enough to achieve.

On a personal note, hopefully Porzingis is back for the game at the O2 in London this January! 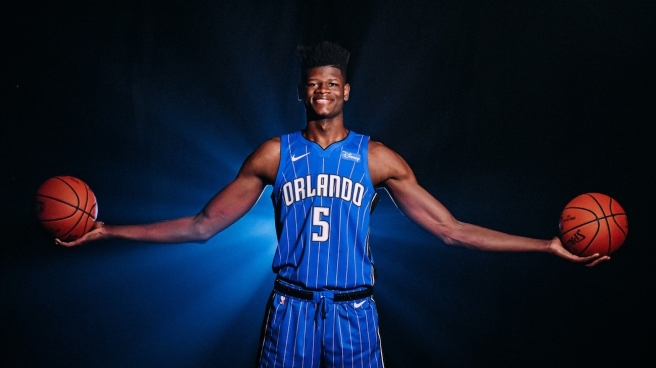 Preview
This season promises to be an interesting one for Orlando. The Magic have three really exciting big men in Aaron Gordon, Jonathan Isaac and Mo Bamba who are all obviously dominant inside but can all shoot to some degree from beyond the arc. They also still have Nikola Vucevic on their books.

The three bigs all have real potential – Bamba probably having the biggest upside. He’s a 7’1 center that can stretch the floor and defend smaller players due to his quick lateral movement. But where Bamba really stands out is defending in the paint. Using his NBA record 7’10 wingspan, he will no doubt be a shot-blocking machine this season. Although Bamba should play a good deal this season, expect the Magic to begin the season starting Vucevic at center. Because of this, Bamba to be named Rookie of the Year is as big as 25/1 with Bet365.

Due to their size, the Magic really should be grabbing a huge amount of board each game. It’ll be interesting to see which of their big ‘big three’ takes on the task of boxing out opponents and which grab the ball. Gordon has been improving his passing during his time in the league (his assist per game increasing year on year), so he may be the man to pull down rebounds and start fastbreaks for the team.

Orlando is a team that owns it’s own first round draft pick for 2019, so it’ll be highly likely we’ll see the team tank for a good chance at landing a top pick. This motive, the departure of Mario Hezonja and the severe lack of quality playmakers in their backcourt makes it unlikely Orlando will even be able to surpass last season’s paltry 27 wins.

If I were forced to have a Magic-related bet for the season I’d side with backing the team to win under 31.5 games at 10/13 with Bet365 – but that’s a pretty skinny price and you’ll be sweating if Bamba and co hit the ground running. Instead, I’ll be keeping an eye on how this team rebounds betting on player over/under rebound markets instead. Stay tuned for some of those tips during the season!